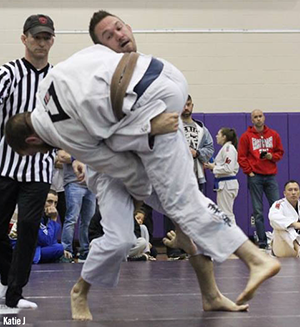 WHAT IS BRAZILIAN JIU JITSU?

Brazilian Jiu Jitsu (BJJ) is martial art that focuses on ground fighting. It was adapted from Japanese Judo by Carlos and Helio Gracie. It promotes that a smaller, weaker person can defeat a larger, stronger person by use of superior technique. The most common approach to this is by finding ways to ground fight an opponent in such a way that submission techniques such as joint locks and chokes can be applied. BJJ was created out of the desire to create the most effective system possible for real fighting. Most people have become aware of BJJ from its success in MMA.

The benefits of training BJJ are numerous. They include:

Self-defense: The fundamental purpose of any BJJ club should be to produce students who can defend themselves. A skilled BJJ practitioner can defend him/herself much more easily than a non-practitioner. When one trains frequently against other skilled individuals it makes the task of self-defense much less dangerous against untrained opponents.

The fundamental purpose
of any BJJ club should
be to produce students
who can defend themselves.
We believe in producing
skills that can be applied
in any type of fight
whether it is on the
street, in an MMA fight or
sport competition match.

Self-confidence: A student will begin to feel increased in self-confidence after practicing BJJ for just a short time.


HOW DO WE PRACTICE BRAZILIAN JIU JITSU?

Warm Up: An instructional BJJ class begins with a warm up. The warm up consists of motions and drills designed to prepare the body to train, teach BJJ specific movements and build muscle memory.

"The best gym by far.
Instructor is always on
time and never holds back
on what you need to know,
learn and do. Carlson
Gracie jiu Jitsu changed
my life for the better all
thanks to the instructor
and gym! And for the price
you can't beat it."

Position Drilling/Sparring: The last activity of the class is practicing live with other students. This is most commonly referred to as “rolling”. When we desire to develop specific skills, positions or situations are chosen to be practiced in isolation. This increases a student’s skill in the given situation. At other times the students may start from a neutral position where the more senior student is encouraged to take a disadvantaged position from the start to help the development of the new student. These situations depend on the current lesson and the skill development chosen by the instructor.


WHAT DO WE DO DIFFERENTLY AT CARLSON GRACIE COLUMBUS FROM OTHER BJJ/MARTIAL ARTS CLUBS?

At Carlson Gracie Columbus we believe in producing skills that can be applied in any type of fight whether it is on the street, in an MMA fight or sport competition match. The Carlson Gracie style of jiu jitsu is well known for being highly effective and we focus on delivering that battle tested style to our students. We also strive to give our students the tools to be able to apply their jiu jitsu. We emphasize additional training in the striking and takedown facets of fighting. This approach enhances the ability of students to be able to choose how a fight will occur.